Our flash is better than yours

Why vendors state that their Flash System is better then others and why should you compare Flash vs Flash.

Before we even start go deep, let's start with the basic.

Before we get talking about the difference between flash vs flash, let’s go deeper into what flash is.

I think this is a great explanation from IBM’s website,

Flash storage is a solid-state technology that uses flash memory chips for writing and storing data. Solutions range from USB drives to enterprise-level arrays. Flash storage can achieve very fast response times (microsecond latency), compared to hard drives with moving components. It uses non-volatile memory, which means that data is not lost when the power is turned off.

In this content, they say that it uses less energy. I don’t really agree. If you compare a one storage array full of mechanical disks like SATA drives with one storage array with flash drives, the flash storage array consumes more power than the traditional SATA Storage array, but we will discuss the Total Cost of Ownership (TCO) and the Return of investment (ROI) later in this blog and explain why Flash storage use less energy and also give you a better ROI and TCO.

What kind of Flash does exist 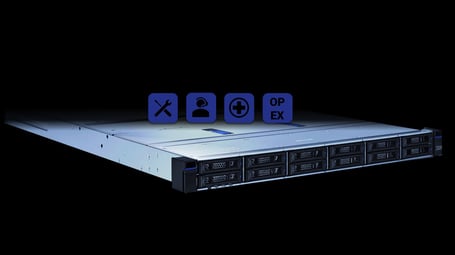 Today we only have one kind of flash storage and that Solid-State Drive (SSD), but you  probably heard about Non-Volatile Memory Express (NVMe), but this is basically only a protocol for SSD Drives and the same thing goes with M.2 Drives that are also a protocol for SSD disks.
If you are looking at a more enterprise class flash systems you maybe find something called Storage Class Memory (SCM). There are various actual technologies that are classed as SCM, for example Intel’s Optane family and Samsung’s Z-SSD, both of which use other types of solid state media to provide even lower latency and ever increasing throughput.
There is also something called NOR and NAND but that is a generation type of SSD where NOR is an early version where it was optimized to read when NAND also increase the performance on write, and most types of SSD today is of type NAND.

Why SSD is cheaper

Every time you’re talking to a vendor, all of them will tell you their flash arrays are much cheaper than your old traditional storage, even if you have a hybrid solution like SSD Tiering or SSD disk for hotspot data.

Why SSD is cheaper and gets lower TCO and better ROI is because you can, with less hardware, reach the same performance. That means you basically can cut your disk arrays with a 1/3 of the hardware but still get the same performance. But not only that! Because you have less hardware it uses less kWh and also generate less heat, that mean less power to cool down your data center.

Flash is also now available in extremely high densities per unit, and per rack unit. For example, IBM recently announced their FlashSystem 5200, a 1U high dual controller storage system that can provide over 500TB of usable capacity via their FlashCore Modules.

But if you are looking for the best PB per kWh, mechanical disk like 3,5” SATA drives is still the best option, but remember, that storage should not be there for performance - it should be there for archiving data and is a great complement to your SSD Storage tier.

Another great influencer to reduce the cost with flash is also the latency. With SSD you’ll get a quick response time, that means the CPU and the memory in your compute doesn’t need to wait for the information to return before it can continue with the next request, therefore with the same compute but using SSD storage your servers will performance much better.

Performance between Flash vs Flash

Let’s start with a simple comparison in this case, if we are using a regular SSD disk over a SATA Controller vs NVMe Disk the main difference is not how fast the actual memory chip perform, it is how close you get to the CPU.

With SATA Controller you can reach the speed of 750MB/s (in theory) but with NVMe connected directly to a PCIe Slot, you get a much better performance where we have approx. 1GB/s per PCI lane and a standard NVMe disk use a minimum of 4 lanes and that means a directly attach NVMe Disk can transfer approx. 4GB/s.

But GB/s is not all, we are also comparing number of IOPs (Input/Output Per second) and the amount of number of IOPs is depending on how low latency your controller can deliver. And the distance to the CPU makes a huge difference in this case, the further you go and the more protocol you need to convert as lower latency you get.

If we compare a SSD connected over a SATA Controller, I found a statement that said a standard SSD should perform 70,000 – 100,000 IOPs and if you compare that with a regular HDD where you only have 100-200 IOPs per disk, and take that to your ROI/TCO calculation to get the same performance as a SSD you need to have a lot of HDD to work together to even get close to the performance you get with a single SSD.

But what happens when if we compare a SATA connected SSD with a PCIe direct attach NVMe Disk? With NVMe you can now expect over 300,000+ IOPs per disk. Take that into conclusion between SSD vs a NVMe disk, that means we can reduce the hardware even more and reduce the usage of power and cooling.

To summarize this, SSD will reduce and get a better ROI/TCO then a regular HDD, and even if you’re looking at having something that performs much better than a HDD you should probably go all in to use NVMe to get maximum performance and lowest ROI/TCO for fast performance disk.

An issue with NVMe in the past was that it could only be connected on PCIe and therefor we couldn’t get the smartness functionality like RAID or similar redundancy. Therefor if you were looking to use NVMe you needed to have a software define RAID layer on top of this like Linux LVM2 or Windows RAID, but this created an extra latency layer that created slower performance than expected.

In 2019 IBM came out with a solution how to build a NVMe Disk Array using SCM memory chipset and this helped a lot of Machine Learning (ML) and Artificial Intelligent (AI) project to be much quicker or databases to perform much faster.
So instead of using a slow disk array based on SATA limitation using SSD disk behind it you can now get maximum performance of a PCIe connected disk but still have the security using RAID.

What does Cristie Recommend

What we at Cristie recommend is when you are looking to upgrade your storage from HDD or upgrade your existing SSD storage array. Take a look on a NVMe based Storage Array and compare that in performance and TCO perspective because with the cost savings you can do on the amount of hardware such number of disks, number of compute, data center cooling and data center power consumption. This could probably even save you more money in the end.

And when you have look at NVMe based storage, compare each vendor and see how long latency you should expect and how many IOPs per disk array it can perform. With small simple steps you can save a lot of money, not only on how much a disk array cost, it will save you power and cooling and help you to take a closer step to a more environment friendly solution.

Why is our Flash Storage better then yours?

By using real Enterprise SCM combined with a build-in RAID functionality, we can deliver both performance, low latency and reliability for a great price level.
Why not test us, what can happening? Better, cheaper and faster.